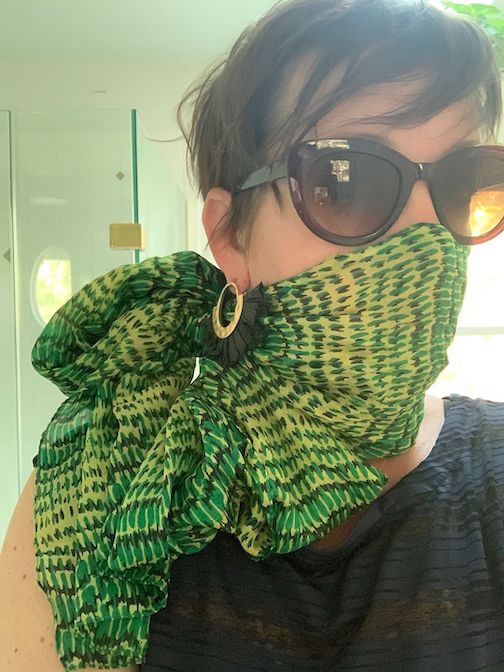 Yesterday, I had to pull myself back from posting a screed on a friend’s Facebook post, because one of their friends, a person I do not know, had offered up some particularly dumb-sounding advice about how people should comport themselves during this time of pandemic. I went for a walk in the woods instead and sounded off a pretty vicious rant to a friend of mine in California. I was loud. I was furious. It felt effing great.

The curve we’re trying to flatten is not the learning curve, which is clearly Everest-pitched and there be dragons. We assume the experts are doing what they can to learn in the moment. Some of them are maybe clever enough to do it (as a species, our talent for problem solving is only bested by our insatiable appetite for bullshit) but it’s super unsettling to sit back in your constrained, possibly bankrupted, isolated life, legally prevented from doing anything but make “Tiger King” memes and watch a bunch of theoretically smart people and well out of their depth government types flail around helplessly, throwing whatever they can at the wall to see if anything sticks.

Is the ship sinking? I know we’re not supposed to be asking that question. Not yet anyway. Just like I’m not supposed to wake up at night worrying that we won’t actually be able to meaningfully flatten this curve, that millions of people will die regardless, and millions, even billions, more will suffer unimaginable hardship and maybe die in the attempt to save them. This is the kind of thing you worry makes you sound like a republican or something. This is the kind of thing leads you to scale balancing territory, which always inadvisable, especially in the middle of the night, especially especially when you like history, but suck at math.

What I can say for sure is that the dearth of solid leadership and professional advice has led to widespread dissemination of absolute hooey,* from a whole world of self-important jackasses who presume to know something that no one else has figured out. Sometimes this stuff has a whiff of fact about it so A Credible Publication will run an article by Greg from Springfield, who took one chemistry class sophomore year before developing a productivity app to track the household staff of hedge fund managers, and now promises that the best way to protect family from COVID is to rub children in fish oil, stuff them into graphite suits and allow them to shoot neighbors with laser beams if they come within 50 feet of your lawn. And incidentally, “have you heard that the economy will only come back if you douse your investment portfolio with the Ibprofen-free blood of a sacrificial goat at the light of the first full moon of the next fiscal year? Because that’s what I learned playing Candy Crush with my coworker who has an aunt who knows a lady who was married to a dude that once sold live bait to Warren Buffett so I’m pretty sure he agrees with me. “

In the meantime, the public health organizations keep kind of sort of changing their minds about things–learning curve, right?—as they continue to refer to what all of us non-plague positive/non-medical staff are experiencing as “inconveniences.” Like, is every single person that works in the communications department** at the CDC a complete psychopath? Are they really so unimaginative to think that job loss, isolation, heartbreak, a widespread unfolding mental health crisis, and the fact that the worst people in the world are using quarantine as an excuse to power grab are somehow analogous to Starbucks messing up your Latte order or having to get up and go downstairs to reset your router if the internet goes out.

And while we’re on the subject: if the internet goes out, in a plague, nobody can hear you scream, and if they can, they probably won’t do anything about it because they’re terrified of violating social distancing protocols. So I, a single person, now have to worry about losing wireless or cell service because it’s how people know I’m still alive and how I know other people are still alive. My night terrors are a now just reel of “Six Feet Under” cold opens. Usually it’s me slowly choking to death on a martini olive on my kitchen floor where my neighbors will be afraid to help me and no one will find me for 12-18 months. I hope I’m wearing something fabulous when it happens. So two years from now, when they have a vaccine and we can all leave our houses, they’ll find my skeleton in an evening gown and think, “Well, at least Alison went out on brand. If she’d only thought to stock more sweet vermouth, she might have continued to have negronis and never had to resort to martinis and this might never have happened.” (Moral of this story: cocktail olives can be deadly during global emergency, and always make sure you have enough sweet vermouth).

And sure that’s hilarious when I think about it happening to me, but what if it happens to one of my family members or one of my friends?

Anyway, I’m off to try and figure out which of my fashion scarves (I don’t/won’t own a bandana. I have some dignity, people) can be best altered into dystopian wasteland gear so I can go out for groceries and try to find some sweet vermouth (it really would be a tragedy to die from a martini; it should AT LEAST be, like, a Vieux Carre).

Wish me luck in this brave new world. Here’s hoping someone, anyone, out there has an actual plan. I love the Sex Pistols and all, but I hate pretending to find peace in our shitty present, and I can’t wait to have a future again.

*Seriously people, check your sources. I’m not saying your florist’s Ayn-Rand role playing software developer nephew absolutely will not pen the economic strategy/public health initiative that gets us out of this mess, but he’s probably not the first person I’d turn to for real advice about how to manage this crisis. Just because he’s published on the internet doesn’t make him credible. Or to put another way, I’m published on the internet. No one’s inviting me into the war room (thank god).

**I know a lot of people, myself included, who have a lot of PR experience and might need work before this crisis is out. Call me, CDC. I have some a whole list of words we can workshop to replace “inconvenient.”

Picture today is of said attempt at masking.