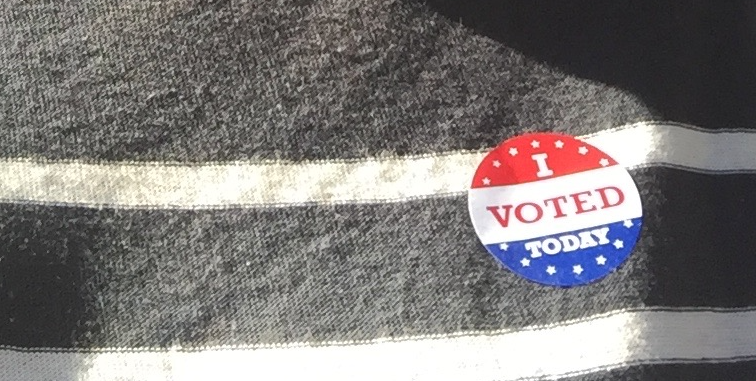 My first election was November 1980. Carter/Reagan. My understanding, from a historical standpoint, was that it was an election in which a surprising lot of Baby Boomers, who all reputedly had grown their hair out just in time for 1968 and then spent most of the intervening twelve years experimenting with drugs, communes, cults, macramé, multi-level marketing and revolutionary violence (not necessarily in that order), suddenly discovered polo shirts and jumped ship because, I dunno, Reagan made them feel nostalgic for the Westerns of their youth or something?

I was a Carter girl. An avid campaigner, I led the most vocal faction of Democrats in Miss Nina’s four year old preschool class. It seemed like a lot of newly polo-ed ex-hippie grown-ups were pooh-poohing Jimmy Carter, both amongst each other and in the press. And that, to me, seemed like a solid enough reason to throw my support behind him. Really the only reason, because I was  four and a half and wasn’t 100% on policy.

“Jimmy Carter has personality,” I told the local news reporter who came to cover our mock election for their Kid’s Say The Darnedest section. He smirked and patted me on the head, and shushed me before I got add, And Reagan has no soul. I felt condescended to, which is the fastest way to push me into a rage blackout.  I sulked all the way through the accompanying photo shoot.

The reporter had me pose with Reid,  a fellow preschooler who’d refused my offer of marriage the year before (another humiliating defeat captured for posterity by the local paper, fyi) and had annoyed me ever since. Recently Reid had been cast as Captain Miles Standish in the preschool Thanksgiving pageant and I had been cast as his wife. “What’s his wife’s name?” I’d asked Miss Nina and she’d smiled and patiently explained that none of the women on the Mayflower had names (or lines in the pageant)but we were welcome to make one up. When she shot down “Empress Cynthia Galactica Violet” on the grounds that it didn’t sound American enough for the Mayflower, I told her that was fine, though technically hadn’t she just told us the Mayflower was from England. I’d be Diana Ross . . . Standish, I guess. She didn’t like that either, I might add, but there was a critical Crayon eating situation happening at the time so she yielded the floor.

I told everyone on Election Day that I’d voted for Carter. Mom. Dad. My sister, in utero. The bank teller. The cashier at the supermarket. The German lady at the bakery. Skip, the man from the dry cleaners who dropped off dad’s shirts on crinkly paper hangers. Carter didn’t win, of course. There will be differences of opinion about that here and now. I’m not going to weigh in on that, except to tell you that I was, again, four years old and disappointed because a thing I wanted did not come pass. It was my first (but not only, and far from greatest) electoral disappointment, and it obviously made enough of an impression on me that, forty years later, I remember it.

I have friends/family that don’t always vote. I have friends/family that have philosophical issues with voting. I have friends/family that vote differently than I do. That’s their right, (even as I struggle with the latter in recent years). We still operate on the idea we live in a democracy (of a sort) and no matter how broken the system looks. I hold by that idea, because I was a four year old girl who was motivated in a mock election. Because I was genuinely thrilled to turn 18 so I could vote. That was a big deal to me. And, look, gang, I turned 18 in the midtermiest of midterms– 1994. No one I voted for (absentee, ps, because college) won. I continued to vote, though and voted in every single election, no matter whether it was a school board bond or a Presidential, no matter whether the poll worker was like “You’re number 17” and I was like, “Today?” and she was like, “Total,” no matter how many of my cooler, more interesting friends and mentors told me it didn’t matter, or I was supporting some capitalist death machine, or I was just stroking my own ego, trying to make myself feel better.

I’m perhaps too stupidly optimistic, too naïve, too enthusiastic, or even too American to believe it. And after enduring the paralyzing horrors of 2016 (with 2000 as a little shitty appertif) snd waiting for recounts in local elections when the winning and losing could be decided by one vote, I’m pretty sure my vote is not just a self-congratulatory gesture. I know it matters.

I can’t talk all of you into it—a few people I love would bristle if I tried–but there is something to it. Even if your candidate doesn’t win (I live in the South, my candidate almost never wins). Even if you wake up the morning after demoralized. Even if things are worse. Even if the guy you voted for isn’t the guy he turned out to be. Even if.

It’s perhaps not an exaggeration to say that our civil rights, our nation, our humanity, our very lives are at stake. Even if you don’t currently think they are. Maybe even especially if you don’t thinj they are. I feel the “Why Didn’t You Stop It?” stare from History raising my hackles all the time, and I think it’s high time to come up with solid answers.

Start in voting booth. It won’t solve every problem. It’s a start, though, and maybe the first and easiest step you can take to stop the whole cavalcade of awful coming down the pike until we can figure out a plan that doesn’t solely involve, say, barricades and bloodshed.

But I’m trying really hard, for my mental health and yours, not to harp on the negative. I’m just in under the wire on Voter Registration Day. I’m a hours late and you’re headed to bed. Tomorrow, though, register, if you haven’t. Encourage the people you care about to register if they haven’t. Hell, tell the people you don’t give a cuss about to register. You don’t have to make them feel bad about it. Just tell them to do it. Tell them it’s kinda great. Tell them it makes a difference. Tell them I’ll be there, as I have been, for every election in memory, even before my vote counted.

And if they actually make it to the polls, tell them we can trade some good stories (masked) while we stand in line, waiting for our chance to change our world.