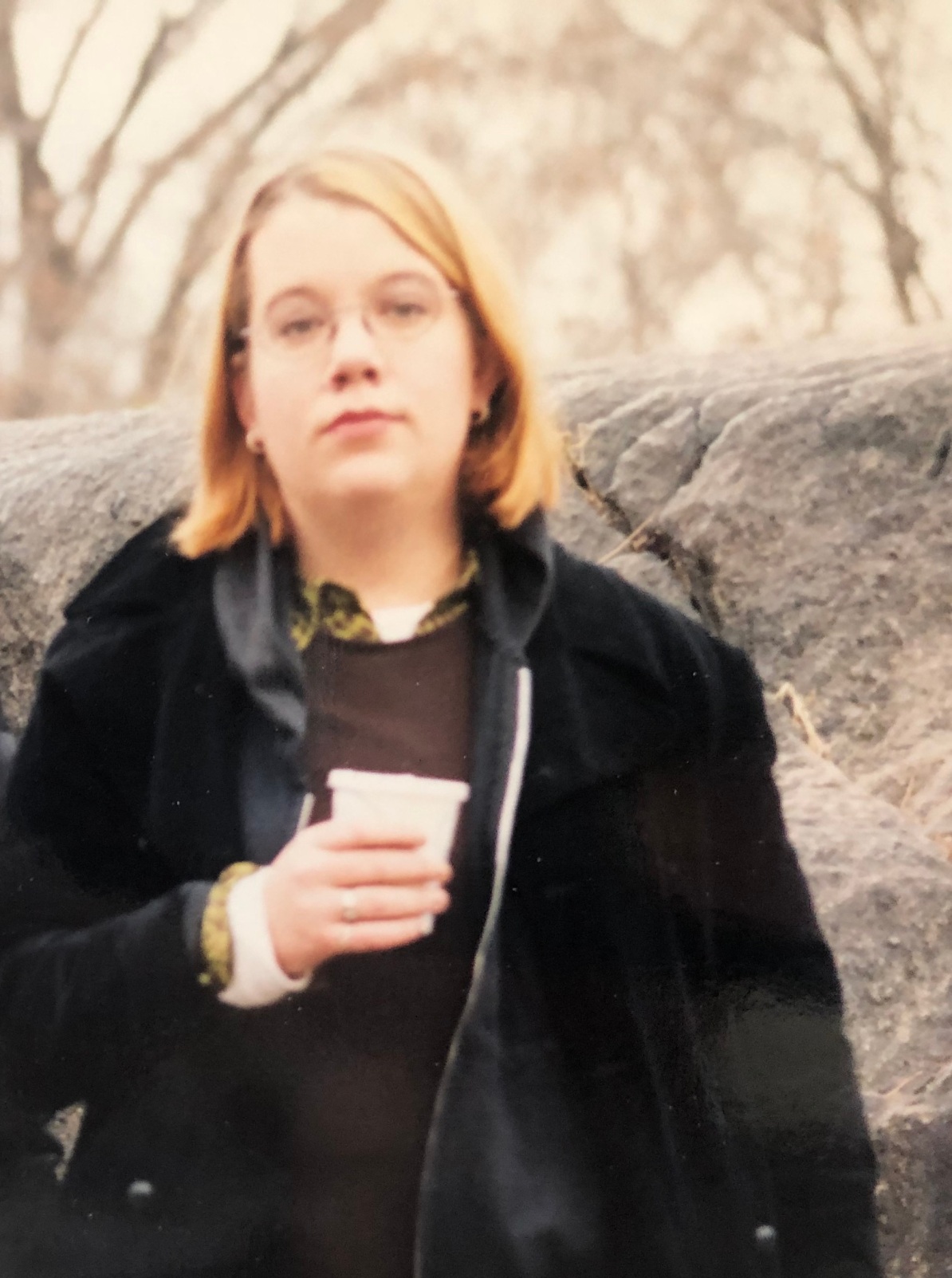 When I was a freshman in college, inclined to stomp around the idyllic campus of my toney women’s college in leather outerwear and combat boots like I might hit Thunderdome on the way to Art History class, I signed up for a psych study to test for Seasonal Affective Disorder, because they offered to pay me $15, which, in those days was enough to buy a carton of Camel Lights and cup of coffee+100% tip at the Waffle House up the rural highway from the school. I sat in a dark room answering a personality inventory looking a few slides, ultimately flummoxing the two students doing the study.

“Oh my god,” they said. “It’s like you have the reverse of this. It’s like you’re actually happier in the winter. How weird!” They were both tall and blonde, a matched pair of Malibu Barbies, the kind of girls that had tanlines in February because they’d spent short term doing a bikini internship in South Beach, the kind of girls for whom summer as a concept exists.

I remember thinking, “I am a fat, indoorsy, pasty, ginger-adjacent misanthrope with a whole galaxy of moles and thunder thighs who has managed to get sunburned in the UK in February and currently favors a wardrobe that is 90% black tights. From a strictly practical standpoint, does it surprise you that I’d prefer winter?” Then I probably stalked out humming Jesus and Mary Chain lyrics under my breath, as I chainsmoked on the brittle winter grass under a sickly sky. I probably thought, though I never would have admitted it at the time, that I looked pretty cool. (I didn’t).

For the next few years, I liked to brag about having Reverse Seasonal Affective Disorder, as it if were some kind of official diagnosis and not a result of a 20 year old’s pre-Buzzfeed Buzzfeed quiz. I’m sure I did it in some ironic, blasé way, like, “I mean, total cliché, right?” inviting people to make fun of me, while simultaneously thinking that summer was for chumps and boors, the crass, the conservative, the shallow, the banal, the grossly commercial, the sort of people who would willingly wear shorts and sandals and choose to live in, like, Florida or Southern California. As opposed to, say, Seattle or Scotland or any other place that bands I liked were from.

Being into winter was a stance, a reflection of how cool and tough you were as a person, a move that justified wearing fashionable layers and keeping a closet full of boots, vintage coats and sweaters. Of course, being into winter was not such a heavy lift when you lived south of the Mason-Dixon line, in the kind of New South southern sprawl city where there is roughly one snowplow per million pairs of flip-flops and an inch of snow elicits panic at the supermarket. My “Winter,” even then, in the pre-Deep Climate Change years of occasional deep-ish snow, was a heavily 48 degrees Fahrenheit and cloudy phenomenon, in which you could comfortably chainsmoke outside the coffeeshop in January in a hoodie and a motorcycle jacket and feel zero pain.

It wasn’t real winter, which was not a thing I remember walking into until sometime the late 1990s when I exited a hotel on my birthday in an insufficient (but cute!) vintage coat into February in Chicago and it felt like an aggravated assault. I spent that night shivering and drinking whiskey and having a bit of an identity crisis. Who was I? A weak person? A warm weather person? God forbid, a summer person? Three days later, I flew to Austin, Texas and stepped off the plane into bright sunlight and about 75 degrees at 6pm and tried to make myself hate it.

Reader: I could not.

Because the truth is I loved warm weather. I’d always loved it. I loved swimming and beaches and bright sunlight. I loved dusks that went on forever and peaches and cherries and being able to walk outside wearing barely more than a sundress and being able to go about in the world without looking for gloves. I liked the feel of an impossibly warm wind that would blow across salt water and make you feel like you were flying. I love the heavy lush of peak summer when the green felt so dense and liquid you might slip into it and come out the other side just a mess of vines and gardenia and mosquito repellant.

So I very carefully, very quietly, stopped telling the Reverse Seasonal Depression story, because it was obviously bullshit. And though I loved my winter wardrobe—I mean, I do truly ove a good sweater and a nice pair of boots—I also loved the porch all day. I stocked up on sunscreen and wide brimmed hats. I learned to set my beach chair under an umbrella. I embraced sandals (within limits). I still avoid shorts (I have some self-respect), but I leaned hard into hot weather.

And twenty-odd years later, I still live in a place where I’ve never had to shovel snow in my life. I have friends now that never knew me when I was in my winter era. They give me a hard time about the summer thing. They don’t like the heat or the sweat or the bugs and all of that is valid. VALID. They’re also probably cooler than I am, or at least they actually know how to look like a badass and not a swollen marshmallow in a puffy coat and a beanie. Or else they have attractive throw blankets and candles that smell like boreal forests. They have Fair Isle ski sweaters and actually know how to pronounce “hygge.” They’re the kind of people who see a snow flake and think “magic,” as opposed to “Oh Christ, I should probably start rationing the alcohol.”

It’s not that I’m entirely opposed to cold weather. I’m rather fond of November, in fact, which tends to have a lot of dramatic clouds and limb-rattling winds and if you want to stand around on the deck and let your scarf unfurl around you like Gothic heroine on some poetic promontory (and who doesn’t?). January is tough, though, and February (the month of my birth) is always pretty brutal, even, maybe especially on the years when it’s mild. BECAUSE YOU NEVER KNOW.

That’s this year by the way. And this year is worse because the only way to do anything at all other than stare at a screen and write about your cold weather trauma is to be outside and outside right now is bullshit. There are not enough leather jackets and cute vintage coats in the world to make it bearable. Mostly because of the rain, which feels endless. Even with umbrellas and wellies and rainjackets, outside is mostly just an endless, lonely, muddy squish through the neighborhood.

I’m trying to stay positive, because winter will end and the particular conditions that make this winter so godawful will also (at least, theoretically) end. Spring will breeze through on a cloud of pollen and pent up frustration. The temperatures will rise. The days will lengthen. I’ll stow the sweaters in a drawer with a bunch of mothballs and eat peaches and burrata for days and feel like a human being again.

In the meantime, I’m trying to remember if there was ever a grain of truth to my youthful Winter fandom. Is there some part of my past I can channel? If I pull out the Doc Martens and stomp around my yard with Jesus and Mary Chain in the headphones, might I find some momentary reprieve in the Big Dumb Sad Angry of yore? The groundhog saw his shadow and it’s 36 days until spring. Worth a shot, I guess.

Picture today is of me in Central Park, peak Winter Layers era (circa 1997).

As of this writing, 80,317,150 people have recovered from Covid-19. Globally, 159 million vaccine doses have been administered.