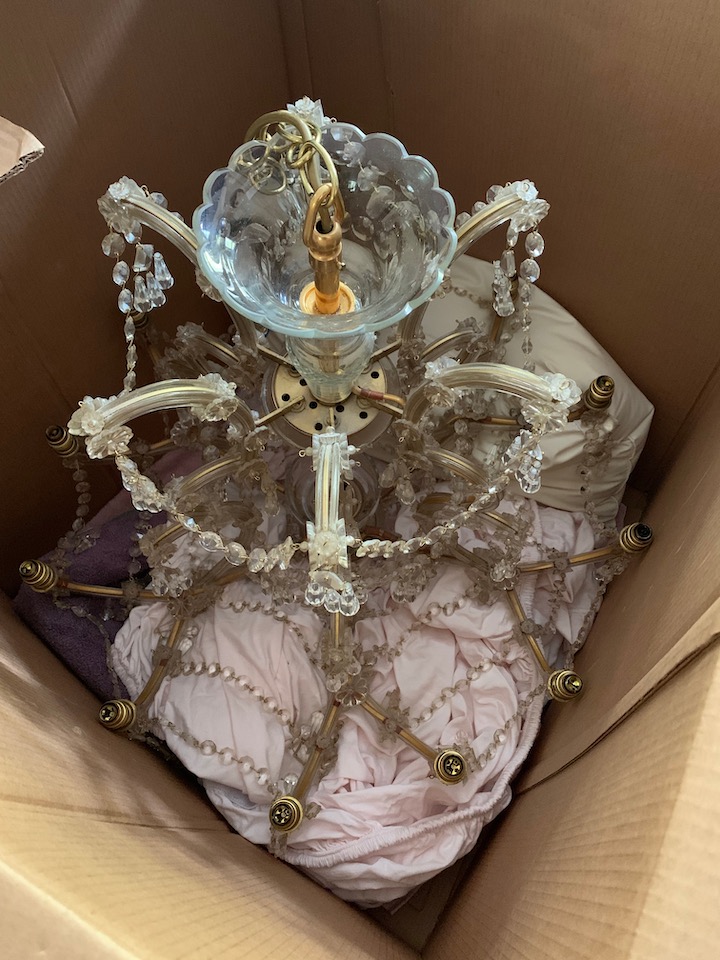 My first vaccine dose happened on St. Patrick’s Day. I was scheduled in at a family health clinic one county and about thirty-five miles away. I left about an hour and a half early, terrified some unforeseen circumstance might stand between me and my fresh antibodies. I listened to disco in the car, hopeful the songs might lighten the mood, and quell any last minute “oh shit, does my throat hurt? Does that mean I have covid? What if I get covid and can’t get the vaccine” hypochondria. When I got to the parking lot, I had forty-five minutes to kill and spread out in the front seat with a couple recent issues of the New Yorker. After about ten minutes a nurse came out and knocked on my window to ask if I was there for the vaccine. I said yes. He told me I could come on in.

The vaccine staff were St Paddy’s-ready, bedecked in Mardi Gras levels of shamrock beads and antenna headbands with flashing green lights. They were listening to Katy Perry. The mood was about as close to barely controlled jubilation as you can in a room full of no-nonsense nurses shuttling you from table to table on the way to a needle. The nurse who gave I had to tell the nurse who gave me the shot about my preexistings. She was about my age and wore a Flava Flav-sized shamrock over her scrubs. “I’m an obese ex-smoker,” I said. She shook her head sympathetically “Who isn’t?” and jabbed just south of the left shoulder. I sat in the hallway in a line of distanced chair, waiting my required fifteen minutes, weeping with something like relief but more weight, while the nurse who fetched me from the car danced along to “Teenage Dream” in the open front door. Beyond him, past the parking lot, I watched an old man walk a terrier across a winter field, just starting to green. I drove home on a winding back road, barely paved, past tidy nooks of meadow with gingerbread farmhouses and storybook barns. I’m not sure it qualifies as a side effect, but that night I slept so hard, I don’t even think I rolled over.

One of the nicest people I know opened an art gallery in the middle of town at the beginning of the maybe end of the pandemic. Most Sundays over the last few weeks, I’ve dropped by, because she’s lovely and talented, because I like petting her dog and looking at her art, because the act of going to a place for something other than food feels satisfyingly dangerous, and it is the only place like that I go. I walk past photographs and canvases, thumb through glossy-paged art books. It feels decadent in that it is, strictly speaking, an inessential errand.

Still, we stand masked, doors open, yards apart. I feel my hackles rise when another person comes in. I pretend at lingering, but never do.

Early on, I thought I was a risk taker, I bristled at people telling me what to do. Now, I feel timid and fragile and if feels like everyone does more than I do at this point.  They sit outside at restaurants. They go to non-grocery stores. They have dinner with friends. They, improbably, travel to places for pleasure. I feel their irritation with my reticence. Do they think I’m a coward? Do they think I’m a scold? Do they know I’m jealous of their bravado? Do they know that the last year has turned me into a constant gnaw of worry, of second-guessing? I’m historically a person who does not say no, because I’d rather regret the thing I did than the thing I didn’t, but this thing has messed with my brain.

“You know a third of the people who get Covid have long-term mental health issues,” said a friend, this evening on the porch. “They become anxious and depressed.”

I shook my head, sympathetically like my vaccine nurse, thinking, “Who isn’t?” But I didn’t say it aloud. I just came inside, worried, and pulled up the articles on my computer, trying to figure out if anyone in the study was anxious and depressed beforehand they got Covid and how much worse it made them. Then I thought maybe I had a sore throat, but it was just that I’d been sitting outside all day in a chartreuse haze of pollen.

“How do you figure we go back to normal?” someone asked on a work call last week. She was making conversation between agenda points, but we all kind of got quiet mulling it over.

“It’s going to be a long time before I go back to dinner inside a restaurant,” said someone.

“Or a concert,” said another.

“Or to the office,” said another, and then kind of blushed when she realized she’d said it aloud in front of her boss.

I made some point about bathrooms, which I didn’t really mean. Peeing in a restaurant bathroom seems infinitely less scary than spending a couple of hours there, crowded, eating and drinking, with the doors closed.

I’m hungry for normal, but I still get weirded out when someone stands too close in the supermarket line.  How the fuck am I going to board a plane or get on the subway or go see a band play or sidle up to the bar, like old times? Will the second vaccine make all that go away?

I went to Virginia last weekend, ten days before my second vaccine, in order to help my mother clean out the rest of my grandmother’s house. At 12:15 Easter Sunday, I was bone tired, wrapping stacks of Dresden china that Nana loved, but is out of style and no one wants, in sheets of newspaper. Earlier that day, I’d followed my mother into a general store-style quickie mart down the block from Nana’s soon to be ex-house, and remarked, as I stood, masked, in line with a six pack of beer under my arm, that I hadn’t been inside a convenience store since August 2020. And I’d held my breath the whole time.

I left with a car full of stuff, pretty things I certainly don’t need, because I’m taking on the material weight of the woman I’ve lost, I guess, because on some level, I still don’t feel like I had enough time with her and I couldn’t give her a proper goodbye. A day later, my mother arrived with a truck full of things and we loaded them into my overburdened house, and I tried to figure out how many overpacked shelves I was from becoming a Collyer brother.

I showed off my new things, my new old things, my relics for elder worship, and endured friends’ ambivalence as they struggled to find a nice way to tell me that the picture I’d send of the thing I’d put there didn’t fit in my house and it all looked faintly ridiculous. My best friend, who I prize for her honesty, just flat out told me that it was too big. And I snapped at her, told her to fuck off, ungenerously, disproportionately hurt by what is, what was self-evident. To wit: my grief is too big for the space I inhabit. The things I have lost take up too much space. At which point does the past looming around you impede even your present

This morning, an electrician, a supremely nice dude, opened a box containing the ridiculous crystal chandelier that Nana kept hanging over her bed and tried to install it in over my dining room table. Every step in the process involved a nagging setback, but he finally got it hanging, and at the moment of glory, as the sunlight prismed and covered my stairwell in rainbows, he came out to tell me that the wiring was off, the whole thing would have to be restored. He couldn’t, in good conscience, connect it to power. He couldn’t, in good conscience, even leave it hanging.

Reader: I flipped out. I choked up. I called my mother like a baby. I saw this thing, this fragile object, this ridiculous glittery doo-dad go back into a dusty carboard box to be stored (who knows where), to be fixed (by who knows who and at what cost), to be reduced from treasure to burden, to become this weight that I can’t even move by myself, that maybe I shouldn’t even have.

“We’re not going to throw it away,” said my mother, on the phone, as I sobbed and watched the pollen marble the pond, while the embarrassed electrician repacked all the bits back into ziplock bags.

And I thought, maybe we should because it’s just turning into another disaster for me to drag around. And then I felt immediately guilty for thinking it.

“It’s just that this a lot for me to handle alone,” I said.

This is a lot for me to handle alone, after he left, staring at the mess, trying to figure out how to summon up the energy to even deal with it.

I should be clear: I have friends. I have family. I have neighbors. I am a social person, even in comparative isolation. I know that if I send up flares, boats will appear on the horizon.

But I am also a single person who survived a pandemic at a few hundred miles remove from family in a single-family home without a roommate. I did all the calculus on what would happen/what would have happened if I got sick. The things I could realistically depend on people to do (bring groceries). The things I could not (leave food outside my bedroom door). The things I would have been afraid to ask (take me to the hospital), because the last thing I would ever want to do is put other people at risk.

I don’t know how to make a decision anymore without calculating risk. This sounds like a good thing, maybe, but it lacks any possibility of spontaneity, of surprise, of fun. I hate living this way. I hate that I don’t know when I’ll be able to stop.

I get that I’m not alone with this. I read articles about who we think we’ll be after Covid, but it seems like a lot of people they talk to have come to solid, affirming truths about themselves. “I’ve learned to be more forthright in the things I want.” “I’ve learned that work isn’t everything.” “I’ve learned to find strength in meditative silences.”

I get my second shot on Wednesday. I’m sure I’ll leave two hours early. I’ll drive down, worried that my spring allergies are a freak case of Covid. I’ll listen to disco. I’ll bring a New Yorker for the parking lot, and maybe the nurse will come back early to the fetch me in for my final inoculation.

I don’t know how I’ll feel on the back side, side effects, notwithstanding (they’re worse after the second shot, they say, and I’m getting Moderna). I guess I’ll feel relieved. I think I’ll feel like, at the very least, I’ve put in the foundations for After, whatever After is.

Picture today is of a chandelier that is more than the some of its parts in a distended cardboard box .