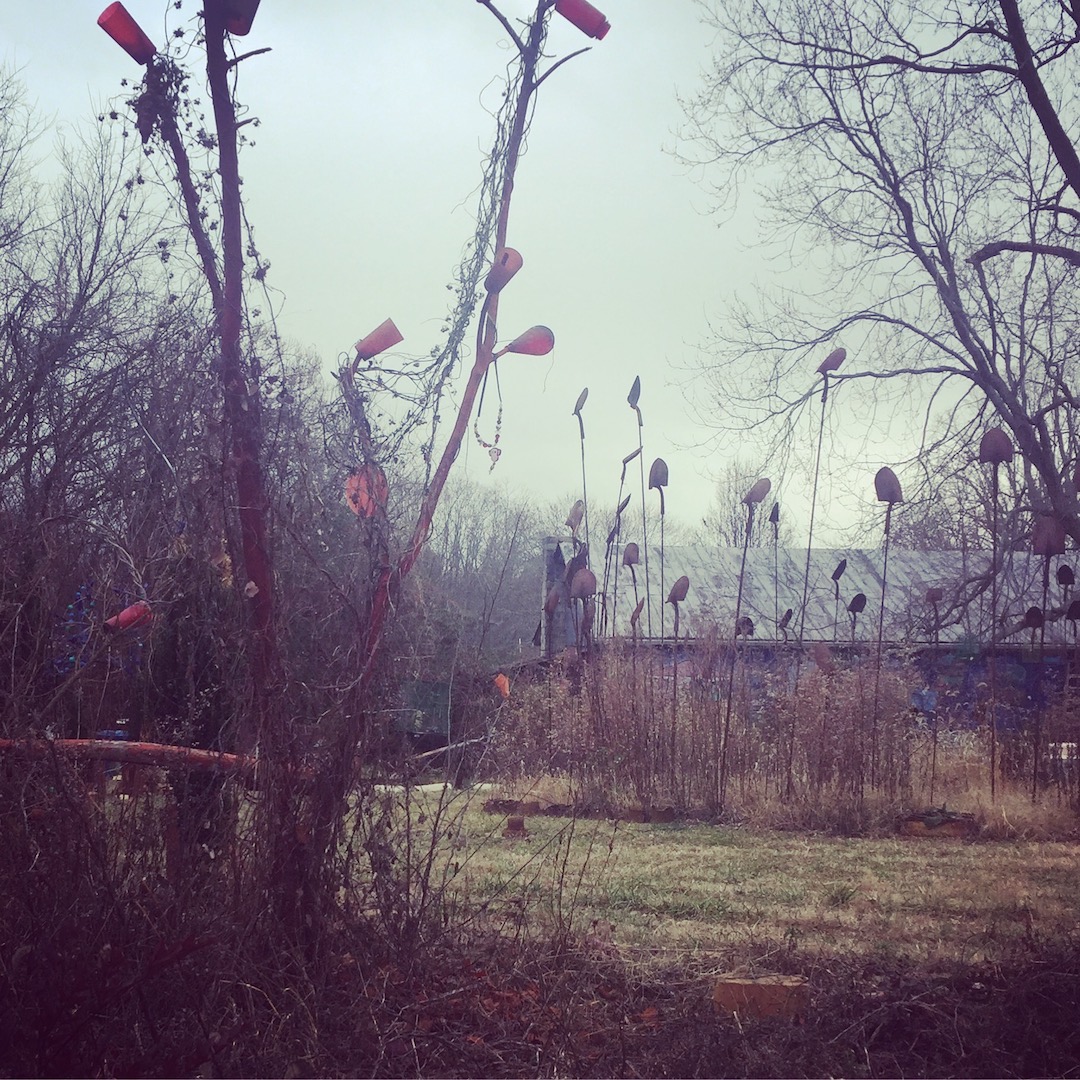 I spent New Year’s Eve of 2016 dancing at a bar up the street with a few of my close friends. It was an unexpectedly good and sweet night and the wicked hangover I endured the next day was surely balanced by the fact that the awful of 2016 passed into the 2017 to the sound of Prince’s “1999.”  We had the window seat in the bar and were all flattered by the dim gold light of the Christmas tree in the corner. Outside, younger people passed, kids that looked like us ten, fifteen, twenty years ago and at least a few scoffed at the sight of us. They think we look old and ridiculous. A few walked on, in search of a New Year’s with more youth and promise, less tainted by forty-ish women in glitter party crowns with dyed hair and weird knee issues and bags under their eyes shimmying to Neneh Cherry songs from before they were born. I want to tell them, those kids that walked away, that forty-something does not feel like forty-something. A thing my mother always said inside I still feel the same as I did when I was seventeen.

Time doesn’t pass the way you think. I still find myself writing 9 in front of the year when I write checks. I still find myself writing checks. I still have the flutter of anticipation on a starry weekend night, as I walk uptown, because maybe anything could happen– adventure, romance, life-altering opportunity, the best time I’ve ever had, honest-to-god, door-in-the-back-of-the-wardrobe magic. And I’m a rational person, skeptical, some variety of atheist, and yet, and yet.

I could have told those kids, but they’d maybe heard it before. Their own mothers said inside I’m still the same as I was when I was your age. They didn’t listen. They won’t think of it at all until they find themselves champagne-flushed, squeezed into cheap sequins bought at the sort of fast-fashion outlet they’re really supposed to have long since abandoned for ethical/aesthetic reasons and because those clothes are made for the teenagers they’d be preparing for college if they’d made different choices (if they’d married young, if they’d wanted children then, if they’d wanted children at all).

Getting older is weird, guys. How to explain that I was so much more likely to make dismissive kids today commentary when I was thirty. Maybe because then I was still pretending to be a grown-up. Now I know I am irrevocably grown-up with the knot of worry that never abates, with aging family and never enough money and a weird internal chorus of have I made all the wrong decisions? that is sometimes I have absolutely made the right decisions but more often I have made okay decisions considering the circumstances, many of which I could not change. Acceptance is not always acquiescence. Innovation is born out of limitation. I believe I can be content within these parameters, even if talking about it makes me feel like one of those self-help-y cheeseballs in a dumpy, overpriced linen tunics who talks about Buddhism and writes twinkly essays about Fulfillment and Spirit and Creativity. Seriously, if I start wearing socks and sandals to some fancy meditation retreat, you have permission to kidnap and deprogram me. I mean, Jesus Christ.

Like all of my friends and a majority of my fellow citizens, I spent January 2017  vacillating between horror and panic at the thought of the incoming President. I read a whole stack of books to avoid reading the news because the news was never good. I let my NPR sustainer status lag and shifted my monthly donation toward newspaper subscriptions and the ACLU, partially because I thought NPR’s 2016 election coverage was bewilderingly terrible and because I found myself better able to read about Trump than hear the man speak.

I neither made nor wore a knitted, pointy eared cap the color of Pepto-Bismol. I did not load on a bus and ride to Washington in the early dawn the day after Inauguration, though many of my friends did. I was driving back from another, less-overtly political trip. I stopped at rest areas along the way to read Twitter Feeds and international news coverage and admired my friends’ clever protest signs on social media. I was moved by the mass of women, even as I worried whether the fervor of fellowship and famous spokespeople and fun craft projects would falter afterwards. The Resistance, as it was, as it is, ended up being more resilient than that. The various grass-roots groups that emerged in the days before and after Trump’s Inauguration mostly eschewed the silly hats and nice-white-lady empowerment anecdotes in favor of the the dull, thankless business of getting shit done.  They organized neighbors. They birthed a number of (effective) high-profile protests and actions in the wake of Trump’s first travel ban. They introduced a number of Americans to the always tedious, often fruitless business of trying to stay polite whilst talking on the phone to smug Congressional staffers every single day for months at a time.

I called Congress. I donated so much of my paycheck that first month. I literally went in to debt, which was foolish and self-indulgent, but so is fear and heartbreak. And that’s what I mostly remember about January 2017. The fear and the heartbreak. All the Go Team bluster I made at the time (and I made plenty) was , in part, what the pretty girls in yoga pants and fancy sweater coats call self-care.  I hung a picture of Princess Leia on the wall. I started writing letters again. I went to The Moth to tell a story about the time I silenced a bullying young racist by means of a cold drink his lap when I was fifteen. My name didn’t get drawn, which was, in retrospect, probably okay. Did the world suffer without another zero-stakes story about another nice white lady flexing her righteousness? It did not.

I showed up for a small local protest that occurred on Franklin Street the morning of the Travel Ban. A bunch of students and local politicians spoke.  I observed the furry gray and white rain clouds pudged out over the old post office cupola. It looked ominous and stormy, snow clouds passing to the north, in Virginia perhaps. My mother called shortly after the crowd dispersed. She was herself in Virginia, tending to my sick, ninety-year-old grandmother, afraid the impending storm would leave her stuck in Nana’s too-warm, cigarette smoke drenched house, where the curtains stay drawn so not to fade out the oriental rugs or damage the 18th century tabletops. She felt guilty about leaving. Nana was old. Nana was sick. Nana was alone save her ninety-four year old husband, whose memory was failing even if his body wasn’t yet.

Nana is my favorite grandparent. She voted for Trump. With age, she’d voiced increasingly ugly opinions and given credence to weird conspiracy theory. She believed we were all wrong, of course. She knew, as she sat in her hot, dark, smoky house, in her velvet robe, eternally convalescent, with cable news as her sole constant companion, that Trump would Make America Great Again. If not for the rest of us, well then, for her. And didn’t she deserve some reward for working so hard, for living so long, for putting up with people that didn’t care about her in a world she no longer understood?

From the outside it looked miserable. Her fury. Her infirmity. Her fear. The inequity of living so long and only to find herself unable and unwilling to exist in the world on her own terms. I sympathized with my mother about the hot, dark house and the awful things she said. I hated it for Nana, too, though, because I knew that past the bitterness and close-mindedness, there was the woman I loved more than anything. I never knew Nana when she was truly young, but even at sixty, seventy, eighty, at the vanguard of ninety sitting under the mock-Tudor arches of Hotel Roanoke on a starry Thanksgiving in 2016, just the two of us, I could still see on her wizened, still lovely face a shimmer of excitement at the possibility of adventure, of love, of life-altering opportunity, of the best time she’s ever had, of honest-to-god, door-in-the-back-of-the-wardrobe magic. That inside I’m still the same as I was when I was your age.

Mom and I took turns telling each other that everything would be all right, because it’s what  you say when you don’t know a thing. I really just wanted to know how to get through 2017. It was on my tongue to ask Mom, but it started snowing in Virginia, or maybe I walked into a deadzone in the forest by the University. I never got around to it.