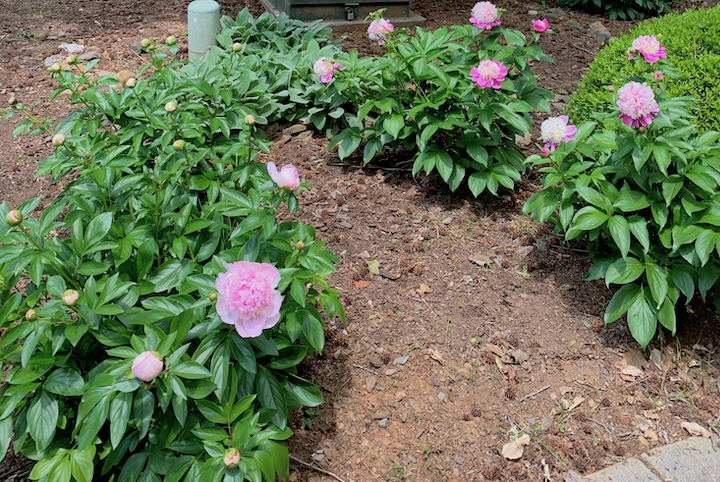 I don’t remember when it started. All I know I woke up one Thursday morning in July? August? and found a bunch of workmen in crossing guard vests pulling up the peonies in my front yard. I dashed out in a disproportionate, apocalyptic-level panic, , because the peonies (a surprise when I bought the house) were this next level swoon of pink and white botanical tutus plopped down into  the absolute dregs of spring 2020. I had vases of them all over the house which made me feel a little like a princess in Imperial Japan or maybe a Henry James heroine. It was maybe one of count-on-one-hand only good things to have come out of a season of Devastating Suckiness.

I tearfully gathered the uprooted plants and briefly potted them into plastic strawberry buckets and plastic containers and watered until I replanted in the yard the next morning. None survived the transplant, I’m terribly sorry to say. A few days later I got a notice from the HOA that Google Fiber had been responsible for the peony massacre and that I could potentially file a claim for replacement of my plants. Friends encouraged me to do so. “Google has plenty of money,” the said. “Tell them they’re rare.”

But while I’ll yell at pretty much anyone if you ask me to, I’m a shit advocate for myself—I have two modes with customer support reps, polite self-abnegation and blinding white hot “I hope you get warts and your dog stops liking you” rage, and yes, I know it’s a problem– and perhaps terminally afflicted with the kind of malaise that sets in when you’re like, “I have ____ energy and everything sucks. Should I save the tatters of my atrophied and crisis-bruised will for, like, smuggling my friends out of the country if Trump wins in November or like just motivating to get through next Wednesday without falling into despair.”

Suffice it to say, I didn’t act. I accepted the fact that replanting new plants in the same spot was maybe a bad idea (the peonies were in the easement, because it’s the only part of the front yard that gets consistent sun, and it’s also not the right moment to plant). And then a second crew of safety-vested men pulled up in beeping trucks and overcrowded golf carts to dig up the yard again.

This time it was AT&T because evidently Google Fiber had messed up their pre-laid fiber, or maybe that was a good cover story for AT&T to upgrade their own Fiber to better compete with Google. I don’t know and I don’t care. When I moved into the new house I made a deal with devil (Spectrum) at the crossroads under the full moon for a least a year of wireless because they threw in an Apple TV and swore I could back out of the contract in a year (this was inevitably a lie, which means at some point in the near future I’ll end up on some purgatorial customer support call which will end with me telling some hapless call center underling that I hope he gets scabies and his dog stops liking them and they will hear from my—nonexistant, fyi—lawyer, and then I will cry and break something and scare the cat, but fail to finagle myself out of the situation so they will overcharge me for the rest of my natural born life because I am a lazy doormat and bad at adulting and  the cycle just goes on and on and on until civilization collapses and I end up living in a mudhut in the fire and flood blighted, plague wracked post-apocalyptic wasteland, which could be twenty years out or could be, like, six months from now, seeing as how things are going).  So I watched the holes appear in the front yard with a sense of resignation and relief that I had nothing pretty left on the sunny margins for them to murder.

That was weeks (months?) ago. I can’t keep track. And I can’t keep track of how many different rounds of men in golf carts and beeping trucks have circled the yard since then and dug holes. As we speak, I came up from a walk in the woods about fifteen minutes ago to find, four trucks, six men and three new holes in the front yard. Maybe they’re Google fixing something that AT&T’s men broken when fixing the thing that Google broke when fixing the thing that AT&T broke when fixing the thing that Google broke when fixing something that never seemed to be broken. I don’t know. It feels like one of those depressing existentialist plays that I used to think were bracingly clever when I was nineteen, but now I feel like, “WE GET IT, JEAN-PAUL. JUST LET IT GO AND MAYBE GIVE SIMONE A BREAK WHILE YOU’RE AT IT GEEZ.” It feels like it will never end and I will spend some indefinite period of time listening to the beeping and watching grown men dig holes in my yard and contemplate them and then fill them and dig them again. It feels like I might be about to do some analogy thing where I compare the very localized version of some corporate wireless internet war playing out among in the formerly-peony filled, now scrubby patch of weeds by the gutter in front of my house to what is happening in the US or the world or WTFever. But don’t worry, I won’t. I simply do not have the energy.

But seriously, Google/AT&T, how many holes do you flipping need?

Picture today is of my peonies in spring (R.I.P)